Menu
Log in
Register
Install the app
You are using an out of date browser. It may not display this or other websites correctly.
You should upgrade or use an alternative browser.

Physical Appearance:
Inkeri is a 5’6” tall & muscular Mountain clan woman. Featuring pale skin, green hazel eyes, and black hair that fades down into silver-white at the ends. Her hair is usually adorned with braids that are tied with beads, blue ribbon, and occasionally decorated with a few Hawk feathers. Other notable and intricate detailing would be the greyish black runic tattoos that line up and down her right arm and upper back. As well as the make-up/paint which covers a few small portions of her face, such as a stripe that lines her bottom lip to the bottom of her chin, three claw marks down her right eye, and a curved rune on the side of the left eye. 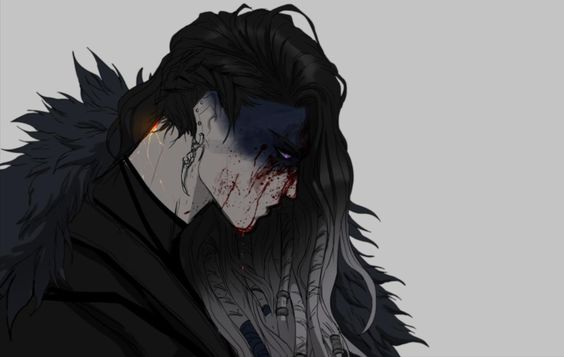 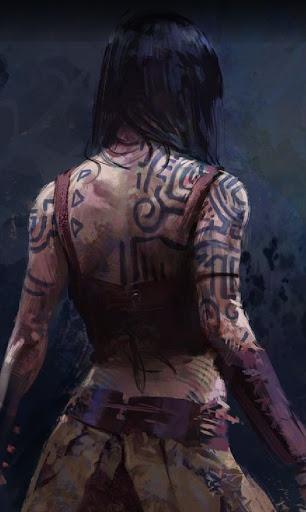 Clothing Description:
Inkeri generally wears clothes that would fit a cold climate, Having furs which adorn her Leather armor underneath. She also struts a pair of black leather pants which are tied up to the waist with a leather belt. The belt has two holsters for her Hatchets. A holster for her hunting dagger in the back, and a Satchel on the back left side to contain any small items such as coin, Bandages, and even her water skin. 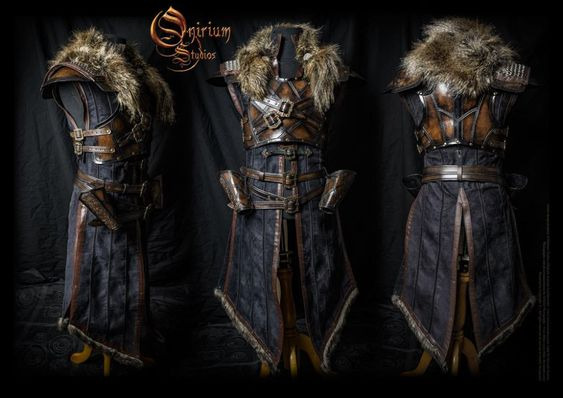 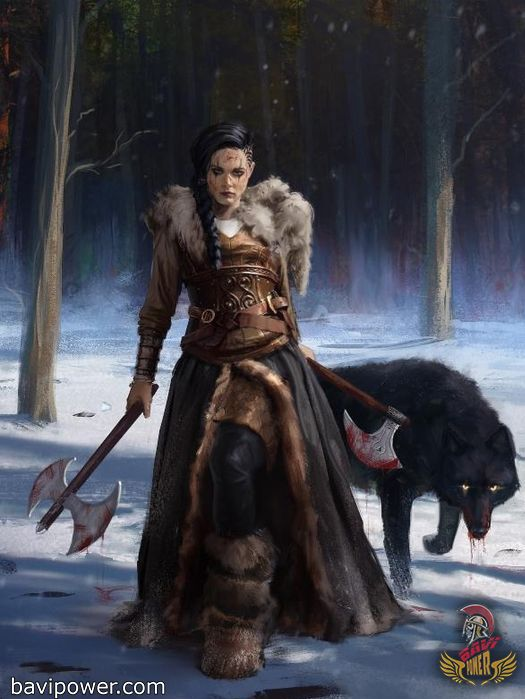 Professional/Proficiency:
> Light crushing: Light crushing became Inkeri’s main profession as it was taught to her by a close friend and mentor, Sylvi. Being taught this fighting skill for at least a decade in time.

Hobbies:
> Shields: Shields became another combat skill, whilst not her main, was taught from the same mentor. Showing her ways to protect herself and others when in need.

> Survivalist: Inkeri learned to survive in harsh climates throughout her childhood. Being taught the basics as well as the advance. Learning how to track down animals for food as well as gathering kindle for fires, Etc.

> Blacksmithing (Weaponsmith): A Skill which was taught by her father. Her skill isn’t something to say she is very advanced in, but with enough time and patience she can craft any weapons that are needed.

Personality & Attributes:
Inkeri is a Courageous woman. Always seeking to be top within her skills and seeking to always improve. Generally with her family and friends she sticks to being very loyalist and protective and is not afraid of taking huge risks if it’s for the honor of her name and friends. Other attributes that could describe Inkeri is Tomboyish, Independent, and sometimes showing a defining assertiveness. Though with all this comes a few negative traits that line Inkeri’s personality. Those being Self-centeredness, Not admitting when she is in the wrong, and rushing in without much of a tactical plan when enraged.

Life Story.
Inkeri was born in the year 459 as one of the two twins within the Hunter & Trader family, Skörn, which was settled out on the outskirts of Ursa clan territory. Being one of the many Hunters of the clan that would frequently make small trade between Grawl clans and the neighboring Civilization below- The Amyrians of Pallomaire. Because of this frequent trade, Inkeri would go through various hunts with her family, but mostly with her brother Wylan to restock supplies with furs, leathers, meat, and etc. Another family tradition which was taught by her father throughout her childhood & teenage years was being an apprentice on black-smithing. Crafting daggers, hatchets, and other useful supplies that could be sold for the family business.

All was well through most of Inkeri’s youthful life until she would hit her young adult age of 19. Where her family set off to make a generous trade offer to the Amyrians in return of luxury items. Only for events to turn sour half-way through.. Her parents, specifically her father, was struck down by the Amyrians. Whilst her mother was taken away by force. Leaving Inkeri and her brother to survive on their own as they fled the scene with what little they had. After a few weeks of surviving the harsh cold they would make their way back into the Ursa clan territory. Whereas Inkeri, falling into a vicious loop of wanting justice towards what happened to her parents- eventually sought out ways of training herself in combat. First starting out mainly working on her hatchet skills on her own for a year. Which during that time caught the attention of Sylvi. A teacher amongst the crowd in the Ursa clan that would end up becoming Inkeri’s mentor in light crushing as well as some other minor shield defense. Along with all this, Inkeri would also help her brother out in training from time to time and continue sharpening her skills until she’d eventually reach the top of class and grow a strong bonding friendship towards Sylvi and her family.

It was only recently did Sylvi’s brother- Ulfhild call arms for Inkeri and Wylan. Promising a more sought out future of adventure and prosperity. Mentioning that if they left the Ursa clan lands, they could claim their own on the mysterious isles called Darroway. That they could be a part of a greater glory without needing to look back into their own faded past. Inkeri and Wylan, without much thought on the matter. Wholesomely agreed to follow along these plans.. And eventually were set forth with the grouping Ulfhild gathered and left the isolating mountains and onto the coast where they would sail off to Darroway.

And to think... A student of mine becoming such a strong woman. They grow up so fast *sheds a tear*

Beautiful app, and well-done. I see no issues, so you're approved. Go wild, Mountain Woman.